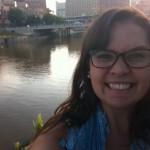 Emily Sadecki is a guest blogger this summer while home in Rochester from college. She will dive into the depths of the Rochester community and share her journey along the way.

Cultivating a community of engaged citizens, health care professionals, students, thinkers, and educators is part of the Destination Medical Center (DMC) vision. Exposing people to new thoughts, ideas, and entertainment is instrumental to creating that sort of atmosphere.

The evolution of the University of Minnesota in downtown Rochester (called UMR) is an exciting piece of that mission. The school has installed a professional series called, “University of Minnesota Connects,” which sponsors free speakers and performances every Tuesday night at 7 p.m. in Rochester that range from poetry readings to food history seminars—each month taking on a different focus. For example, July’s focus was “Arts and Communication.” This initiative supports the university’s goal of public engagement and the open exchange of ideas. 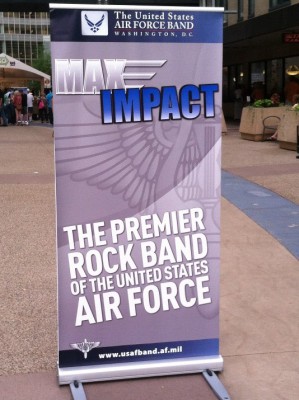 The night that I was able to attend this event, Peace Plaza in downtown Rochester became a landing strip for a very unique U.S. Air Force squad. Max Impact, a premier U.S. Air Force rock band, proudly took the stage in the plaza, dedicated to serving our country not only with their uniforms but with their voices.

“When people think of the Air Force, they think of jets—not music,” I was told by my new friends who were Air Force personnel traveling with the band. (See the photos below. I am the one in the middle; hard to tell us apart, I know.)

This U.S. Air Force rock band is on a tour that will make six different stops as it travels through Wisconsin, South Dakota, Wyoming, and Nebraska. The band is one of six musical ensembles within the Air Force, allowing the men and women serving our country to continue to explore their love of music.

To start, the group captured the attention of all those in the vicinity with its opening rifle ritual. As I looked around, everyone was mesmerized by the grace with which the band performed; those eating outside on the Peace Plaza patio neglected their food, while even the squirmiest of children paused. I swear even the plaza fountain froze for a moment. I imagined myself trying to replicate the band members’ movements, a sure safety hazard.

The crowd then proceeded to the stage, where Senior Master Sergeant Ryan Carson, Technical Sergeant Christin Foley, and the rest of the band performed everything from rock to country to patriotic music. Along with the crowd, I sang to “Don’t Stop Believin’” (much to the dismay of those sitting near me) and unleashed my dance moves during Katy Perry’s “Roar” (also an interesting sight for other concert goers).

The audience was a blend of ages and backgrounds, citizens and visitors swaying to the beat of the music. At one point, the sky became almost magnetic as everyone placed their hands up in the air and swayed back and forth to the tunes.

I couldn’t help but smile. A grin crept its way across my face with each strum of the guitar. The air felt electric, pulsing with a shared sense of pride and connection through music, even in a group of strangers. Laughter wafted up as SMSgt Carson made his way through the crowd serenading ladies, and at one point during the show, the children in the audience were offered the chance to take the stage.

Though entertaining and fun, it also posed a good message. Exposing ourselves to new ways of thinking, makes for a rich experience. DMC recognizes the need for opportunities for the rethinking that UMR is encouraging with this series of events in order to cultivate thinkers that will build the future of Rochester. 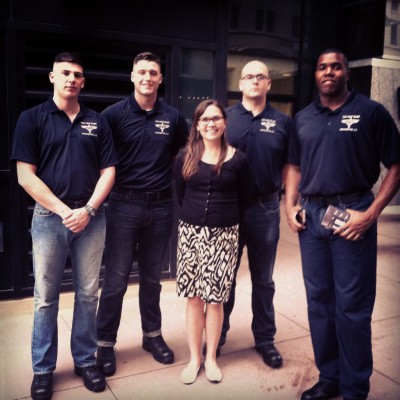 Thank you, Veterans and Currently Enlisted Military Personnel, for your service to our communities and country—in all the ways you share your talents. We appreciate you and your message for an open mind.