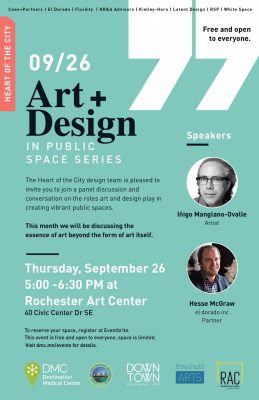 The Heart of the City design team is pleased to invite you to join a panel discussion and conversation on the roles art and design play in creating vibrant public spaces.

This month’s topic will address how art in the public realm creates new dialogues around the essence of art beyond the form of art itself. Chicago-based artist Iñigo Manglano-Ovalle and Heart of the City curator Hesse McGraw will lead the discussion.

Early in the conceptual development of Heart of the City, Iñigo Manglano-Ovalle said, “I want to put sculpture to work.” His work exemplifies the civic-scale ambition and impact of art being commissioned for Peace Plaza. During this conversation, he and McGraw will discuss his expansive view of sculpture for the public realm and the essential artistic qualities that carry through complex public projects.

During his 30-year career, Manglano-Ovalle has been internationally hailed for technologically advanced works that crystalize our most confounding political and cultural narratives into iconic, beautiful form—a thundercloud, an iceberg, Mies van der Rohe’s architecture, or a simple town well. Manglano-Ovalle’s numerous awards include a United States Artists Fellowship, a Guggenheim Fellowship, and a MacArthur Foundation Award. He is noted in Rochester for his landmark 2006 survey exhibition at Rochester Art Center. See more here.

To reserve your space, register here. This event is free and open to everyone; however, space is limited.

The Art + Design in Public Space Series kicked off this summer with topics ranging from how universal design and access are a key to social equity, to how art and design can reflect local context and values, and how to create meaningful interaction and spectacle.

IÑIGO MANGLANO-OVALLE’s works are formally seductive, technologically sophisticated and conceptually rigorous. His works are engaged in an investigation of how certain extraordinary forces and systems—both natural and man-made—perpetually reshape our world. Collaborating with scientists, architects, engineers and biotech researchers among others, he visualizes pure data into physical form. “What I want to represent,” he states, “is how the world represents itself to us.” Through the medium of sculpture, photography, video and installation, Manglano-Ovalle’s works make the intangible tangible and challenge our notions of the political and the cultural.

Hesse McGraw is a partner and curator at el dorado inc, a unique cross-disciplinary practice founded in 1996 in Kansas City, Missouri that moves fluidly between architecture, urban design, curatorial and fabrication projects. Hesse is a curator and writer, and most recently served as Vice President for Exhibitions and Public Programs at San Francisco Art Institute. His curatorial practice and arts organization leadership are acclaimed for shifting organizations and places into springboards that expand the agency of artists beyond the gallery.

His noted long-term projects include commissioning Jill Magid’s work The Proposal (2014 – ongoing), which offers the gift of architect Luis Barragán’s body in the form of a two-carat diamond engagement ring in exchange for the return of his body of work to Mexico; Michael Jones McKean’s public artwork The Rainbow (2012 – ongoing), which generates actual prismatic rainbows at civic scale from recycled water; and Theaster Gates’ Carver Bank (2012 – 2016) in Nebraska, which convened a space of urban ecstasy that supported artists living and working in North Omaha. Through these collaborations, more than 75 curated exhibitions, and extensive public and educational programs, Hesse has powerfully shared the instrumental role of artists in igniting public imagination and animating our largest problems.