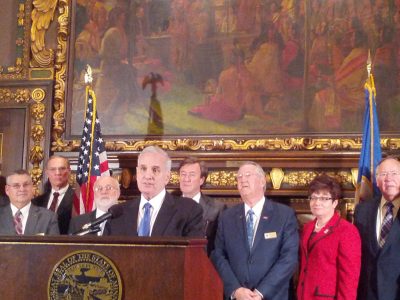 As Minnesota Governor Mark Dayton prepares to leave office after eight years at the helm, he has announced his list of the Top 25 Major Accomplishments that have taken place since he entered the office of Governor, and Destination Medical Center (DMC) was highlighted as one of his administration’s top achievements.

Over 20-years, DMC will create an estimated 35,000 jobs and generate $7.5 billion in tax revenues. The private investment by Mayo Clinic and other private entities are projected at more than $5 billion. As part of this historic partnership, the State of Minnesota, Olmsted County, and the City of Rochester will invest $585 million to build public infrastructure that will help support the growth of the regional economy.

“Destination Medical Center has proven to be an engine of economic growth and a Greater Minnesota success story,” notes Lisa Clarke, executive director of the DMC Economic Development Agency.  “We thank Governor Dayton for his leadership in creating Minnesota’s largest economic development initiative.”