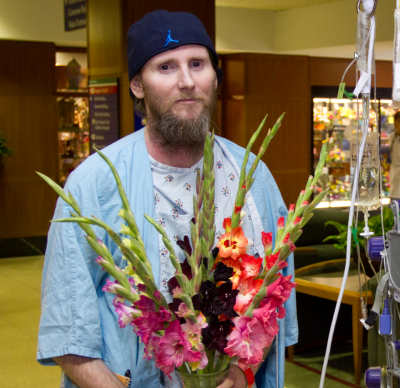 Sometimes, simple gestures can have a big impact on those who need it most. And for the past six years, John and Barb Meyer, of Potsdam, Minn., have been having just that kind of impact on the lives of patients at hospitals and nursing homes in Rochester by cutting bouquets of flowers from their gladiola field for patients in need of a little pick-me-up.

The Meyers say that what originally started out as a hobby after they received some gladiola bulbs as a gift from their son has now (ahem) blossomed into a full-on passion. “This has been our sixth year doing this, and we have developed more than 1,000 varieties of gladiolas,” the couple says. “It’s become a labor of love … When we see people smile with appreciation, the planting, cutting and delivering is all worth it.”

One of those smiles of appreciation can be found on the face of James Mitchell, who’s spent 20th months at Saint Marys Hospital battling his way back to health after from a severe gastrointestinal condition that’s almost cost him his life. He says he was flown to Rochester “on the verge of death” by air ambulance almost two years ago and has now celebrated two birthdays with his care team at Saint Marys, though he says “that was never the plan.”

As his long and sometimes rocky medical journey continues, Mitchell says the Meyers’ weekly gladiola deliveries to Saint Marys have been a most welcome distraction and represent just one more way that Mayo Clinic takes care of the “entire” patient. “For me, the gladiolas symbolize that there is life outside the hospital and help remind me of the seasons,” he says. “I carry that with me — that this season in my life will also pass, and I will get to go home.”

Mitchell says that whether they realize it or not, the Meyers are a part of his care team, along with the many doctors, nurses, therapists, housekeepers and other Mayo staff who frequent his hospital room. “I think of the Meyers planting, growing, cutting and delivering those flowers to hundreds of people like me — they’re part of the integrated care that is Mayo Clinic,” he says. “They will never know how truly grateful I am.”

Nor can he, Mitchell says, fully communicate how grateful he is for his direct care team at Saint Marys, who have become like a second family to him. “They have been my blessing,” he says. “I see the care in their eyes. I have had the best medical team available, and I am thankful. I am forever grateful to Mayo Clinic.”