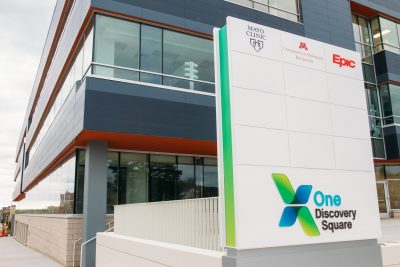 Even in a digital era, Rochester and Mayo Clinic leaders think the best way to foster innovation, collaboration and new discoveries is to put people next to each other, face-to-face.

That’s the vision behind Golden Valley-based Mortenson’s One Discovery Square, a 90,000-square-foot biomedical sciences building in downtown Rochester that next month will welcome its first tenant, medical software company Epic. The $35 million project is one of the early cornerstones of the Destination Medical Center redevelopment initiative, which seeks to attract $5.5 billion in new development around Mayo Clinic over 20 years.

During a preview tour of the building Wednesday, officials touted a design aimed to boost collaboration, from an open lobby area that can double as a lecture theater to conversation niches and “living room” areas, some with whiteboards and other tools, scattered around the four-story building. Collaboration also was at the core of how officials marketed the building, Destination Medical Center executive director Lisa Clarke said.

“We will be bringing companies to this community that have never seen Rochester before,” she said.

Collaboration was also a goal in how the building will bring together those tenants, including three different Mayo Clinic departments, said Chris Schad, director of business development for the Discovery Square subdistrict of the Destination Medical Center.

“Right from the beginning, it was a fairly easy decision to say those three groups are going to be on different floors. They’re not going to be all bunched up in one space behind closed walls,” Schad said.

Instead the three teams – advanced diagnostics, biomedical imaging and regenerative medicine – will have space on floors two, three and four to be closer to partner companies that will occupy space immediately next to the researchers and scientists. 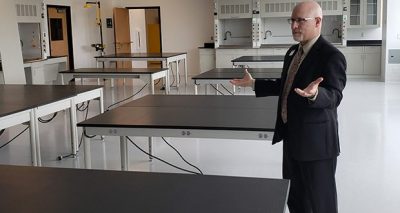 The space can also be reconfigured as needs change. Jay Hesley, chief of staff at the University of Minnesota Rochester, said the university’s space on floors one and three will meet short- and long-term needs.

“We absolutely needed a solution to lab space this year in order to continue to grow at the pace we were projecting. This space coming online in the fall is perfectly timed,” he said, noting that some space currently planned for classrooms has the needed equipment to become additional lab space in future years. “This is actually space that we think of in terms of decades providing services and solutions.”

The Destination Medical Center master plan calls for 2 million square feet of additional research and lab space over 20 years, and the organization lists Mortenson’s building as “Phase One.” Jeremy Jacobs, the company’s director of real estate development, said Mortenson is very interested in continuing work in the Discovery Square area. “We think there continues to be robust demand in the market,” he said. “The type of space the market is looking for is changing, so it’s office, it’s lab, it’s tech-based space, and we wouldn’t be doing our jobs as developers if we weren’t thinking about how to meet the needs of the market…In the not-too-distant future, I think that we would certainly hope to have another building that we could talk about.”