2017 was a big year for the Rochester International Airport (RST), which saw a 27% increase in passengers over 2016.

Why the significant year-over-year increase?

These additional flights, coupled with a recent push by Rochester area businesses and organizations to “Fly Local,” contributed to the growth, but airport leadership wants to see this progress sustained.

“There is enormous potential for continued growth at RST,” says John Reed, the airport’s executive director. “With ongoing support from our region, we will be successful in retaining these new flights and recruiting more service.”

The airport terminal is also nearing the completion of multiple renovations, including a TSA checkpoint expansion, restroom additions, and a $12 million project ultimately relocating U.S. Customs to the main terminal, aligning with Department of Homeland Security requirements.

As DMC leads the community in positioning Rochester as a destination medical center, providing ample and accessible transportation to everyone will be key. “The airport has long been an invaluable local asset and its role will be even more significant as DMC continues to evolve,” says Lisa Clarke, executive director of the DMC Economic Development Agency. “The increased travel at RST is another testament to the energy and vitality we are seeing throughout our changing community.”

The more often travelers choose RST over other options, the more likely additional flights and hubs will be added. RST officials would like to see service added to a major western hub, with airports in Dallas or Denver high on the list. 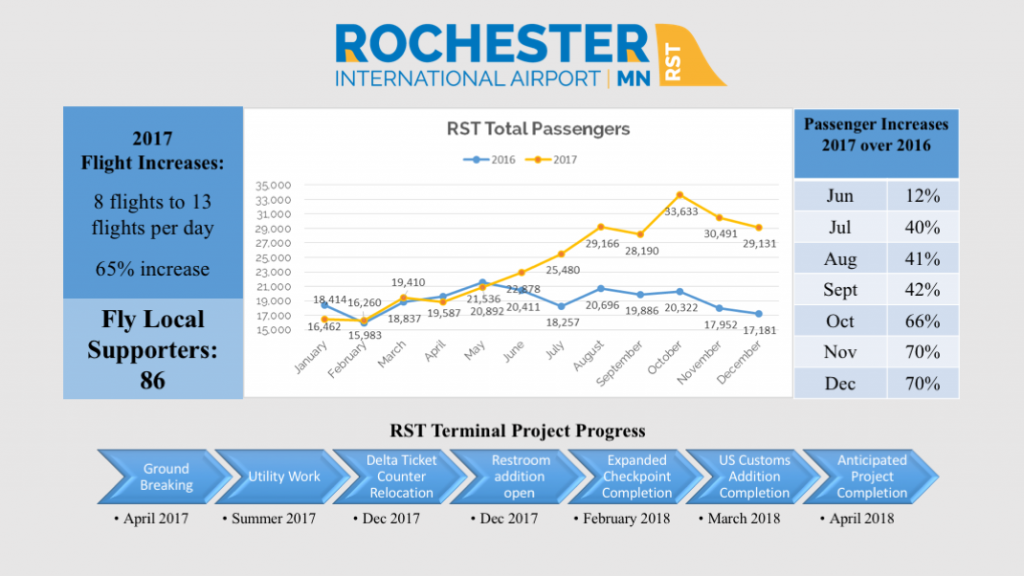