At the heart of every destination city is a vibrant downtown, where signature spaces, diverse programming, and enticing events encourage residents and visitors to linger a little longer. 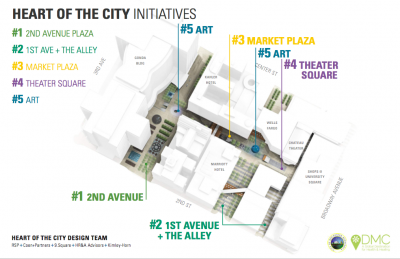 In downtown Rochester, the bold vision for the true Heart of the City is coming to life as designers unveil a new future for the Destination Medical Center (DMC) sub-district where residents and visitors come together to celebrate life, community, health, and wellness 365 days a year.

From Discover and Dream to Design and Do

The Heart of the City Design Team recently unveiled plans for the much-anticipated core of downtown. Their forward-thinking vision for this integral part of the DMC district was received with excitement and anticipation by the DMC Corporation Board of Directors, the Rochester City Council, and the community at-large as they learned of the new plans for the sub-district.

“Now is the time to be aspirational – and you’ve done it,” says Jim Campbell, DMC Corporation Board Member. “It feels very, very good.”

Redesigned public space near the Gonda Building will foster a better connection between that building and Peace Plaza. First Avenue will remain open to traffic but will be the first curb-less street in Minnesota. Second Avenue will have an inviting, garden-like feel. Art will become a feature of the Heart of the City, with hopes of encouraging collaboration among local and national artists.

Four participants from 2016’s PlaceMakers prototyping festival have also been a part of helping to design the Heart of the City spaces. For example, a central row of trees will divide Peace Plaza, and pop-up spaces for downtown retailers will make the adjacent brick-and-mortar shops more accessible. The alley will be activated through use of projection technology to share images.

Hope and healing, gathering and celebration

Community leaders, residents, and visitors will all benefit from the new Heart of the City. Jenna Bowman, executive director of the Rochester Downtown Alliance and member of the Heart of the City Community Advisory Committee, is especially excited to see the transformation take place. “The Peace Plaza as we know it today was built nearly 10 years ago,” she says. “It’s since become a space where the entire community could gather, and the true heart of the city.”

Nearly 50,000 people come together on the Peace Plaza each winter for the three-day SocialICE event. The summer brings more than 20,000 people downtown each week for Thursdays on First & 3rd. “It’s a vibrant part of our community,” Bowman says. “The future Peace Plaza will be a beacon for hope, healing, gathering, and celebration for residents and visitors alike.”

According to Patrick Seeb, DMC director of economic development and placemaking, the next step in moving Heart of the City forward will be to develop an advocacy and leadership team. After that, signs of the physical changes to come will be visible as the group begins to prototype installations of the key features of Heart of the City. Planners will also begin exploring the programs and events consistent with the vision.

“Many months of planning, extensive public engagement, and creative thought has gone into the final design for Heart of the City,” says Seeb. “Seeing it become a reality will be a reward for the entire community.”

The Design Team has used existing photos from the sub-district to create renderings that depict what the future of the spaces could look like. Below is a before-and-after of the west end of Peace Plaza. Check out more visuals, maps, and information on the DMC website. 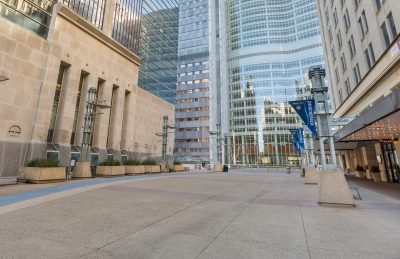 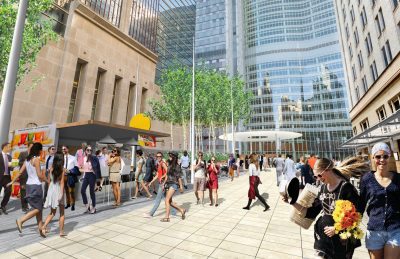