The City of Rochester is hosting two public information sessions on the upcoming Downtown Sidewalk Experience Enhancement Project. This project, expected to occur in 2022, will replace the deteriorated brick inlay pattern sidewalks along Broadway from 2 Street North to 4 Street South, and also along Historic 3rd Street SW. Information about the project is available on the project website.

“This project is focused on improving the experience for those moving around our downtown. The sidewalks will be safer and the current blight of the deteriorated and patched brick will be eliminated. This is one of those important infrastructure projects that will have benefits for residents, visitors, and downtown businesses,” shares Cindy Steinhauser, Deputy City Administrator – Development Services & Infrastructure.

Patrick Seeb, Executive Director of Destination Medical Center Economic Development Agency highlights, “This project is a vital infrastructure improvement for our downtown. We listened to our community and made this project a priority. We are looking forward to working with local businesses and stakeholders on a Business Forward strategy to minimize the impact of construction on their operations.”

*The content presented at these sessions will be identical, so stakeholders do not need to attend both meetings.

One session, including the attendee Q&A, will be posted to the project website.

HEALTH AS A CATALYST FOR GROWTH

Our cities have a massive opportunity to build regional economies around a focus on health, well-being, and vitality.
‍
Wellness can be an economic strategy for places that choose to be Health Cities. It includes building clinical healthcare, as well as investment in health sciences, food innovation, wearables, digital health, and much more. Health Cities are also emerging as destinations and magnets for talent and investment because they have urban spaces that encourage and facilitate healthy living through their design, green spaces, local food, fresh air, and exercise.
‍
Rochester, MN, home to the Mayo Clinic, is leading the way as a Health City. It’s a global destination for health and wellness, attracting top talent, emerging as a center for R&D in health data, and offers a catalytic model for growth in the region and across the nation.
‍
On January 26, CityAge, in collaboration with Minnesota Finance & Commerce and Destination Medical Center, is bringing together the leaders mapping out the course ahead for the development of health-focused district communities across the nation.

with more to come…

Downtown Rochester’s population grew at some of the fastest rates in the region over the last 10 years, according to a recently released study commissioned jointly by Rochester Downtown Alliance and Destination Medical Center.

“We first saw the need for this study in fall 2020,” said Holly Masek, RDA executive director. “We knew many daytime workers that downtown businesses rely on were moving to a hybrid work model and changing spending patterns, but we could also see new residential buildings were opening all around downtown. We wanted to find out who these new downtown residents were and if we could connect their consumer needs to our existing and future downtown business community.”

“Downtown Rochester has been described as the fastest-growing neighborhood in Rochester,” said DMC Director of Business Development Chris Schad. “Providing current retailers and potential retailers with relevant data to understand the customer-base in the downtown area is a vital piece of our plan.”

The study, which was completed by the Minneapolis office of Stantec, included quantitative demographic analysis, interviews with building managers, focus groups with residents of new and existing apartment buildings downtown, a digital survey of downtown residents, and interviews with downtown district managers in comparable neighborhoods in the country.

The new residents of downtown include undergraduate and graduate students, young professional singles and couples, young families, and downsizing empty nesters. Residents are focused on walkability, inviting street life, experience-based shopping and dining, and products that are considered “local” or “authentic”. They are well-traveled and active, and often civic-minded. A previous DMC study found that a downtown resident is likely to spend seven times more in one year in a downtown neighborhood than a downtown employee, making these audiences vital to understand.

The report has been shared with City of Rochester officials and the downtown business community. It will now be incorporated into DMC materials used to recruit new retailers and businesses to the downtown core.

The full report can be found here.

About the Rochester Downtown Alliance
The Rochester Downtown Alliance is a nonprofit corporation comprised of a broad range of people representing property owners, business leaders, the city and others with a direct stake in enhanced business and economic development conditions in the downtown district. We work together to build a vibrant downtown community. We believe a strong core positively impacts the greater city of Rochester. Through a series of special events, activities, and initiatives, we create energy, excitement, and a unique character to Downtown Rochester, Minnesota.

About Destination Medical Center
Destination Medical Center (DMC) is a 20-year, public-private partnership, and economic development initiative. The $5.6 billion plan is the largest in Minnesota’s history and one of the largest currently underway in the U.S. The partnership, which began in 2013, combines Mayo Clinic private development with that of other developers and investors, in addition to public infrastructure investment from the city of Rochester, Olmsted County, and the state of Minnesota.

The strategy supports a vibrant downtown retail experience for residents, visitors and downtown employees. It includes tactics that support the growth of existing retailers and the recruitment of new businesses.

“This is exciting and important work,” shared Brooke Carlson, City Council President and DMCC board member. “There are great opportunities to learn from models in communities with similar situations to our community. Walkable, mixed-density neighborhoods with resources near buy for students and other downtown residents will help make Rochester an even more desirable place to be.”

DMC Economic Development Agency (DMC EDA) conducted research on residents of downtown Rochester, the fastest growing neighborhood in the city, to help current and future retailers plan their businesses. It also analyzed current gaps in the retail environment, working with downtown visitors and residents to identify unmet needs. This information will be used to help promote downtown Rochester to businesses considering the area for a store, or to existing business hoping to adjust or expand their merchandise mix.

Future plans include a local, regional and national marketing campaign to raise awareness among site selectors and retailers about the opportunity represented by the downtown retail market. The strategy also involves temporary “popup” uses of vacant stores, properties and pre-development sites to create a sense of vibrancy and present opportunities for aspiring entrepreneurs. A retail incubator is also under consideration.

Board members also today commended and approved the use of DMC and the City of Rochester’s recent award of $3.12 million dollars from the Minnesota Department of Employment & Economic Development (DEED) as a part of its new “Main Street Economic Revitalization Program.” Rochester’s program will provide capital investment for downtown businesses and property owners who do not have sufficient capital to open, adjust or expand operations. Priority will go to BIPOC applicants and vacant properties.

The board also formally commended members Jim Bier and Michael Dougherty, whose terms will conclude at the end of this year. They also commended outgoing DMC EDA board President Jeff Bolton for his service following his recent retirement as Mayo Clinic Chief Administrative Officer.

Destination Medical Center (DMC) is the largest public-private economic initiative in Minnesota’s history. The 20-year plan to transform Rochester into a global destination for health and wellness will attract developers, investors, startups, and entrepreneurs to live, work and play in America’s City for Health. For more information, visit dmc.mn.

October 14, 2021 – ROCHESTER, MINN. – The City of Rochester and Destination Medical Center Economic Development Agency (DMC EDA) are pleased to announce the acceptance of the award of $3.12 million dollars from the Minnesota Department of Employment & Economic Development (DEED) as a part of their recently created Main Street Economic Revitalization Program. The grant dollars will be used to help central business districts rebuild and reposition themselves in the face of a substantially changing downtown economy. Rochester was one of eight communities receiving funding, with a total investment of approximately $40 million being invested across the state.

“Minnesota’s main streets are key drivers ofgrowth, and so many of them have suffered in the last 18 months,“ said DEED Commissioner Steve Grove. “These grants and loans will create jobs, and they’ll help spark investment in key commercial corridors across the state.”

“Following the initial shock of the pandemic, Rochester’s downtown business community responded with innovation, creativity, and determination. This grant program is yet another tool to support Rochester’s recovery,” said Patrick Seeb, Executive Director of Destination Medical Center Economic Development Agency. “Think of this as an economic booster shot.”

Rochester’s program will provide capital investment for downtown businesses and property owners who do not have sufficient capital to open, adjust or expand operations. Formal grant criteria will be established, including the prioritization of Black, Indigenous, and People of Color (BIPOC) participation. DMC will serve as the administrator of the grant.

“We believe deeply that Minnesota must fully recognize, mobilize, and support every business in the region if we are to realize a vital and sustainable economy. Part of our commitment is to the development and stabilization of minority businesses, which build and diversify our economic capacity,” shares Dee Sabol the Executive Director of the Diversity Council.

Before the pandemic, Rochester was already taking steps to diversify and improve the resiliency of its central business district. The program will provide distinct benefits to diverse populations in Rochester.

City Administrator Alison Zelms shares, “Rochester has a strong history of organizational partnerships, which have collectively worked together to best serve the community. This grant will support our work to assist our local businesses in their recovery from COVID-19 impacts. We know that we can move forward together in a way that will make Rochester even stronger and more resilient in the future.”

More information about the grant opportunity will be shared in the coming weeks. 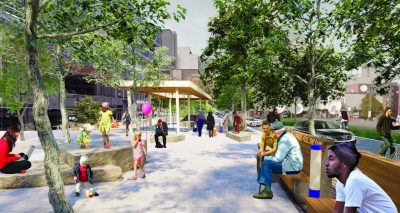 During the September 30, 2021 Destination Medical Center Corporation (DMCC) board meeting directors approved additional accessibility enhancements to Discovery Walk as a result of the Community Co-design process. Additional enhancements include a snowmelt system and three community spaces with weather-protected seating.

Two Community Co-designers, Jenny Rho and Krista Jacobson, joined the DMCC board meeting to share about the importance of the additional enhancements to the final design of Discovery Walk. 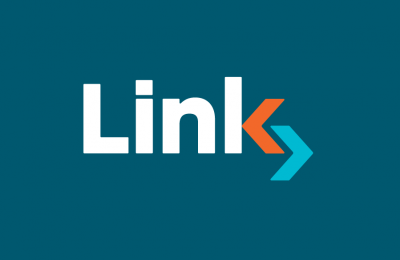 On Monday, Sept. 13, officials from the City of Rochester and Destination Medical Center Economic Development Agency (DMC-EDA) toured an installation built to demonstrate how bus rapid transit (BRT) will be a major part of the future of public transit in Rochester.

Rochester’s rapid transit project is now “Link.” The new name and logo are integrated into a full-scale, branded BRT station model located at the future Mayo Civic Center stop on the future 2.6-mile route. The station model promises to be an immersive experience where members of the public can visit, walk through, and learn more about Greater Minnesota’s first BRT line.

Reimagine the downtown Rochester Riverfront with lights and music show 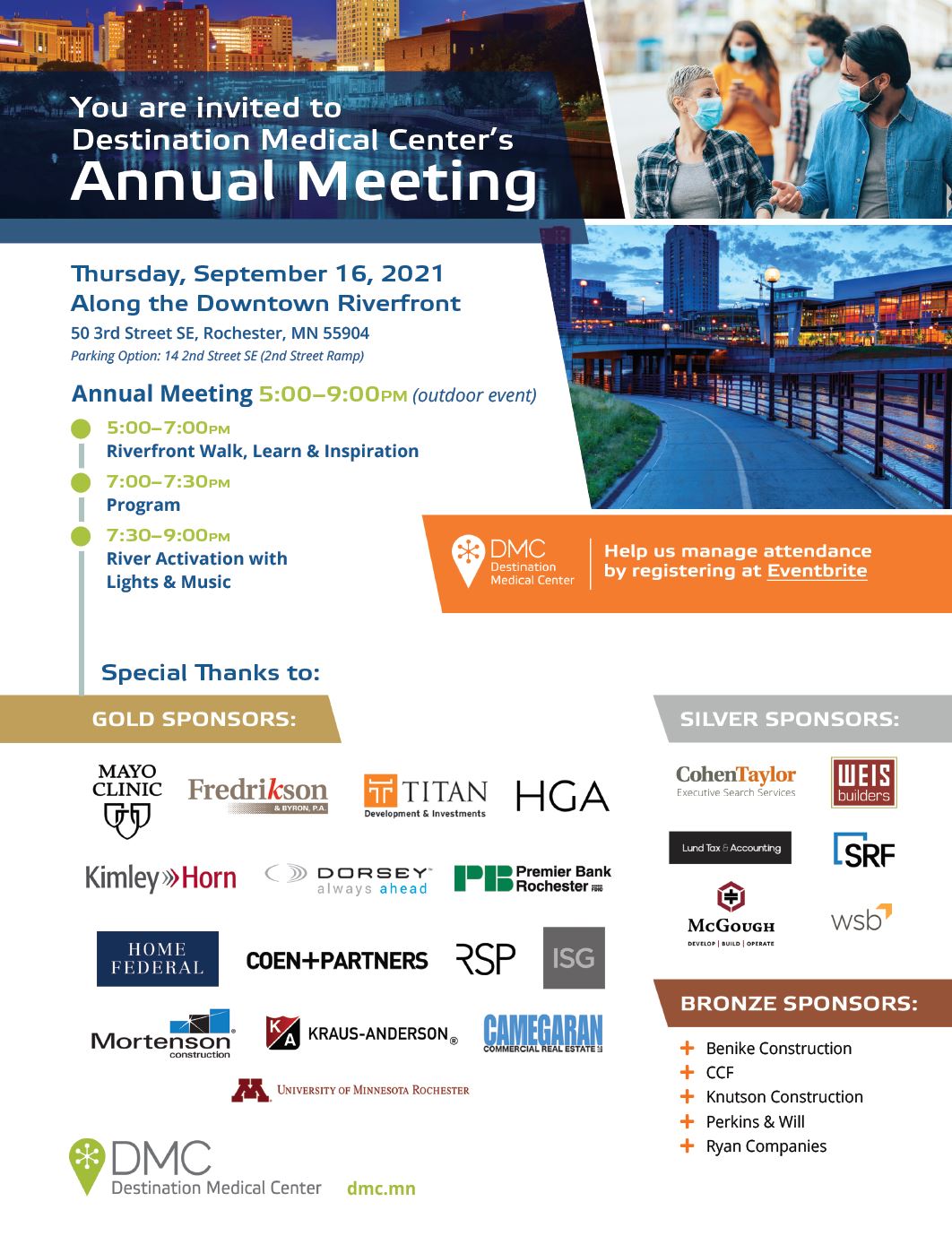