The development activity in each of the DMC District continues to show progress with investment and projects underway at various phases. The Destination Medical Center development plan identifies six sub-districts: Heart of the City, Discovery Square, St. Marys Place, Waterfront, Central Station, and the UMR/Recreation area. Each sub-district is organized around a signature public space and public realm experience.

The Peace Plaza, for example, serves as the signature public space in Heart of the City. Recently, a Request for Qualifications/Proposals process was launched to identify a team to design enhancements to the Heart of the City sub-district. In the next few weeks, a Community Advisory Committee will be established to help steer that design process.

The sub-district Discovery Square, centered on research and innovation, has also begun to unfold. DMC hosted a public event in February to celebrate the early stages of the renovation of the Conley-Maass building on 4th Street SW. Upon completion, the building will be home to Area 10 Labs, BrandHoot, a new, yet-to-be-determined restaurant, and an incubator space to support start-ups and entrepreneurs. At the same time, Mayo Clinic has been conducting a feasibility study about potential redevelopment of some of its properties in Discovery Square.

Most recently, the St. Marys Place sub-district has received a great deal of public attention, largely due to private market interest in redeveloping several key sites in the sub-district. 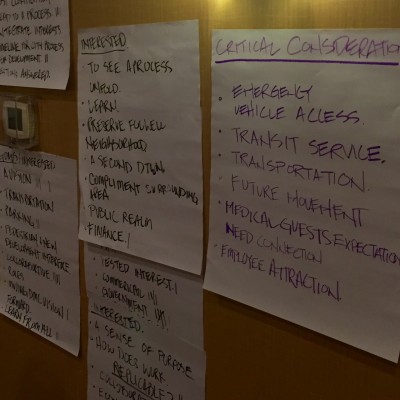 On Wednesday, March 16, a group of city staff and council members, property owners and developers (including Mayo Clinic), neighborhood groups and DMC EDA staff met to develop a process for implementation of the public infrastructure of the 2nd street corridor from 11th to 16th Avenue West. Examples of public infrastructure include entrances and exits to and from the street level, pedestrian crosswalks, and bike lanes.

Following the group meeting, others were invited to attend a presentation summarizing the meeting results.

City council president Randy Staver noted the energy of the group. “There is clearly a lot of passion in the room and a genuine desire for engagement,” he told the presentation attendees. “We want to be thorough but recognize that there also exists a sense of urgency in our community. We need to make sure we have a process in place that is understandable, then we need to abide by that process.” 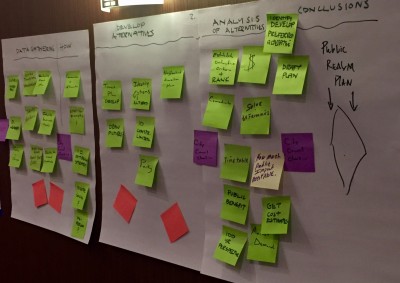 the importance of understanding the existing plans of DMC, Mayo Clinic, and others, identifying the needs of both businesses and constituents, and communicating progress universally as the process moves forward. Pompeian reflected on the group’s forward-thinking mentality as they explored the potential process. “We need to think about the long-term future of this community,” he explains. “We need to think bigger than just the next 20 years.”

The information collected from the March 16 meeting will be synthesized and shared with DMC and the city council for consideration and will ultimately drive development in the St. Marys Place sub-district.