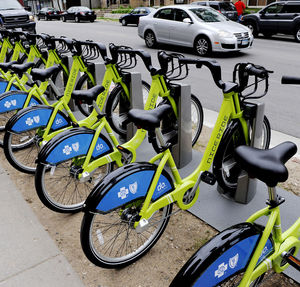 A new occupant for the city of Rochester’s now-empty Fire Station No. 2 property at Silver Lake could shake up the way the city’s residents get around.

Rochester Park and Recreation Department staff announced at a Tuesday meeting they had been in discussions with Nice Ride Minnesota, a nonprofit bike-sharing and bike rental company founded in the Twin Cities. Nice Ride could be an anchor partner at the fire station property, said Paul Widman, Rochester park and recreation director.

“This has become a goal of (Destination Medical Center) and of many other stakeholders and groups in town to provide programs such as bike share, (and) the fire station became a site of interest because of its location on the trail system and its fairly easy access to downtown,” Widman said.