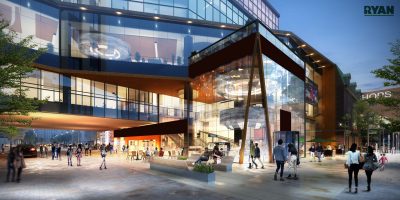 While the renovation of the Chateau Theatre has rightly earned headlines for its potential to transform downtown Rochester’s Heart of the City sub-district, another less publicized renovation project is happening in tandem that will likely have significant impact on the Destination Medical Center plans.

The 1981-built Wells Fargo Building at 21 First Street SW admittedly is not a local cultural icon like the historic theater – in fact, its presence has been rather utilitarian with its walled-off architecture and forbidding façade of dark, reflective glass. Thus, it’s understandable why the ongoing $26 million reimagining hasn’t excited the same level of public interest as the Chateau.

But it probably should. The Wells Fargo Building has three key features which, under the new ownership of Minneapolis-based Ryan Companies, will address important Heart of the City goals. It’s one of the few downtown structures with access to the subway, skyway and ground levels; its location on First Street SW lies on a key downtown block; and its access to the Peace Plaza provides a unique chance to “activate” an underused existing public space.

The Ryan Companies Heart of the City project is a prime example of how private development initiatives arising organically and independently of the DMC effort can be woven into the fabric of the larger picture, said Patrick Seeb, director of economic development and placemaking for the DMC Economic Development Agency.

“Ryan Companies have been an incredible partner on this project, exactly the right kind of people to come in and take on this very important project,” he said. “They showed flexibility. They came in with a pre-existing vision for the building but quickly responded to the chance to expand and enhance that opportunity.”

That collaborative process, which included a relatively modest amount of DMC funding, will result in a much more inviting and “porous” building featuring copious amounts of clear glass. It will also fill in a vital new piece of the puzzle in making downtown more walkable by introducing an easy-to-navigate pedestrian link between the city’s skyway, street and subway levels. 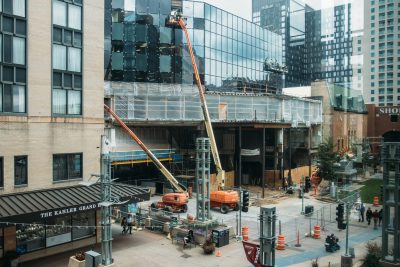 “We were intrigued by the market opportunity presented by what’s really a quality location,” said Ryan Companies Senior Vice President of Real Estate Development Tony Barranco. “It’s just impeccably located on the Peace Plaza and it has proximity to the downtown activity hub of the DMC, so that seemed unique to us.

“Plus, the subway/skyway/street level connection hadn’t been invested in for quite a while. It had an antiquated escalator entrance up and an awkward-looking inability to get down into the subway, and we are going to greatly improve on that.”

Ryan has also redesigned the building to create a new connection between the outdoor Peace Plaza and the indoor world of the skyway/subway system. A clear glass “jewel box” extending onto the plaza will provide a transparent and intuitive communication between the two realms.

The renovated 90,000-square-foot building will be 75 percent occupied when completed later this year; Wells Fargo Bank and Mayo Clinic remain as its main tenants. Ryan is now marketing the remaining 25,000 square feet for retail, office/flex or service industry users.