DMC ambassadors have gathered ideas for the community vision boards, volunteered at community events and shared their suggestions for what would make Rochester an ideal experience for those who visit, live here or work here.

Join the group. Meet others who are jazzed about the possibilities of DMC. Come to one meeting to learn more, or come every week. DMC ambassadors meet every other Wednesday. There are two meetings with the same agenda each meeting day – to accommodate more schedules.

Barbara Porter moved to Rochester 22 years ago, vowing to make it her home. She’s been active in the community ever since. Listen to her thoughts on opportunities to make Rochester even better by getting involved in the Destination Medical Center.

It took just 20 minutes for 300 free pumpkins to be distributed to children at the Pumpkin Festival on the Plaza in downtown Rochester.

Thank you to Destination Medical Center Ambassador (and high school student) Gabriel Yeager. The Pumpkin Festival was his brainchild, and he was involved in the groundwork to make it happen.

Next year, he says, more pumpkins! 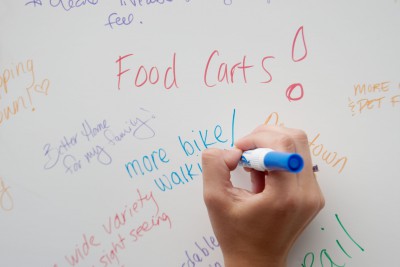 Join in the DMC discussion at Taste of Rochester this weekend – Saturday, Sept. 7 from 11 a.m. to 5 p.m. at the Olmsted History Center, 1195 West Circle Drive SW, Rochester.

DMC Ambassadors will be on hand to answer questions and discuss your ideas. You can also add your thoughts to the DMC vision boards.

With legislative funding secured and a governance structure under way for Destination Medical Center, it’s time for the community to share ideas for Rochester’s future.

In this video, Mayo Clinic’s own Hoyt Finnamore and John Murphy talk with Mayo Clinic staff and other community members about what they envision for Rochester – and even do a little dreaming themselves.

“The community visioning process is an important part of DMC’s success,” says Lisa Clarke, administrator for DMC. “We want to hear from community members, employees, patients, visitors – anyone who wants to help build an even more vibrant Rochester that will provide great experiences.”

The community visioning process will kick off next week. The DMC Ambassadors, a group of volunteers who are rallying the community during the visioning phase, will host DMC Day at Thursdays on First. To participate, visit the DMC table at the Peace Plaza intersection at Thursdays on First this coming Thursday, July 25 from 11 a.m. to 8:30 p.m. Share your ideas and be sure to pick up a free DMC T-shirt – while they last.