Diversity is a key component in building a strong, cohesive community. In fact, the more unique perspectives we invite to be part of our community conversations, the more creative and innovative ideas will result.

DMC connected with Sabol to gain more insight into the importance of diversity in building America’s City for Health and why the Destination Medical Center (DMC) initiative was an important factor in her return to the Midwest. 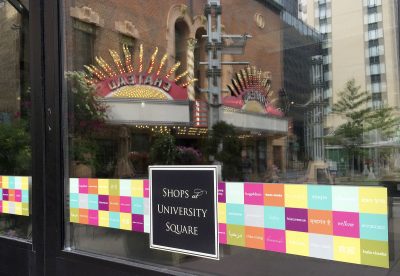 We want people from throughout the world to fall in love with our community. We want our community to love them back.

Including languages other than English on pedestrian signage is a simple, effective way to show openness, respect and that our city is ahead of the curve.

Wayfinding, or helping pedestrians get around via signage, is already something Destination Medical Center planners will need to address.

A cornerstone of the Destination Medical Center plan is to position Rochester as a leader in the biotechnology and medical technology fields. The development of Discovery Square – a sub-district dedicated to advancing game-changing ideas in patient care – is a critical step in reaching this goal.

The groundwork is already there. Medical innovators have long flocked to Rochester to collaborate with the Mayo Clinic on new technologies that are making health care better and more efficient.

Preventice Solutions is among the companies that saw promise in collaboration early on. Emily Benner, who is Preventice’s Senior Vice President of Research and Development, sat down with DMC to talk about how her company is changing the way doctors care for cardiac patients, and what Discovery Square means for innovators.

Previously in this blog I described the inherent qualities of urbanity.  So if you are trying to reinforce or perhaps create from scratch that essence of being urban–what typifies the essence of a livable city–where should you begin?

I believe that to truly begin to embrace urban is to accept two rudimentary principles.  Two vilified, egregious, “dirty” words of urban design.  The first, simply stated, is that to achieve a rich urban fabric requires density. Now before you close this webpage or tear up this paper in disgust because I mentioned that dastardly “d” word, stop and think for a second about how population density leads to many other attributes of urban life that are desired. Why do you think a farmer’s market works?  Furthermore, density can apply to much more than population (e.g. street widths, tree spacing, etc.) and I would argue that embracing the concept of density can help design the majority of component parts of the city system and produce results that far surpass expectations.

The second principle, and one that may be more difficult to explain, is diversity. A vague and catchall term, diversity ensures that everyone is represented, that one demographic is neither isolated nor compartmentalized, and that everyone has choice. Diversification and integration in all forms serve to achieve the larger goals of urban vitality. What I am not intending is to simply address ethnic diversity, which often is the first thing to come to mind. While that is a part of population diversity, it is far too specific.  Rather it means having a Rochester Symphony Orchestra & Chorale concert on the same night as the Americana Showcase. Different strokes, for different folks.

Ultimately, our pursuit of the great city experience that exists in the pages of the Rochester Downtown Master Plan as well as the illustrations found on countless webpages and blogs is not difficult to achieve. What it takes is a fierce determination; a vigilant battle against the outdated planning doctrine of the latter 20th Century and promotion of the settlement style growth patterns that are inherent in cultures all across the globe. It is about making a public place out of empty space. It is about overcoming fear of the word density because it evokes images of slums and high-rises and understanding the word diversity without picturing scary people lurking in the shadows.

We all can do a better job of embracing urban, and if DMC desires to increase the vitality and livability of downtown Rochester, then get ready to drop a whole lot more “d” words in public.

What is it about density that is so scary?  Why does diversity connote societal ills? Join the conversation by commenting below.

Adam Ferrari is an architect and the Director of the non-profit Design Rochester. Podcasts of the radio show “Design with a Capital D” can be found on www.thecobbradio.com