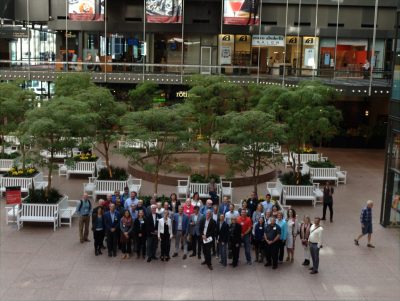 The success of Minneapolis in creating a new vibrancy in its downtown urban core didn’t happen because of one or two development projects – or because of a single event like hosting the Super Bowl. Rather, it was the result of many diverse and civic-minded players working to stitch together a puzzle of very different ideas and interests to create a shared vision of renewal.

That was a key takeaway from the third annual “best practices” tour of Minneapolis’s city center on August 30 by a cross-section of Rochester civic and business leaders.

As in previous years, the 2018 tour was organized by the Destination Medical Center Economic Development Agency (DMC EDA) and curated by University of Minnesota urban design researcher Tim Griffin.

The tour itinerary included first-hand looks at bricks-and-mortar redevelopment projects, such as the “Kraus-Anderson mixed-use block;” the Mill City Museum on the Minneapolis riverfront; the role of skyways and “urban placemaking” at the IDS Center Crystal Court; lessons from the recent rebuilding and cultural programming of Nicollet Mall; the role of business-led downtown improvement districts in creating a vibrant image; and other related topics. 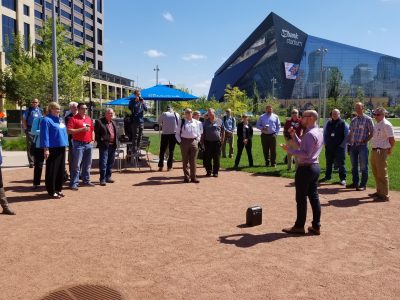 Speakers along the way included such notables as former Minneapolis mayor and DMC Corporation Board Chair R.T. Rybak; Jon Buggy of RSP Architects and Shane Coen of Coen + Partners, whose firms are part of the design teams for the Heart of the City subdistrict initiative; Steve Cramer, president & CEO of the Minneapolis Downtown Council; Cushman & Wakefield Executive Director and retail expert John Breitinger; Tom Fisher, director of the University of Minnesota Design Center and DMC EDA board member; and Pastor Dan Collison, a key leader in the redevelopment of the “East Town” neighborhood of downtown Minneapolis.

“Each of the speakers was asked to talk about things in their experiences that might be transferable to Rochester,” Griffin said. He noted that one of the main goals was to demonstrate how a major effort, such as reinventing and revitalizing an entire downtown, needs the coordinated action of a broad array of stakeholders.

“The big example is Nicollet Mall,” he said. “It has many direct parallels with [Rochester’s anticipated] Discovery Walk for ‘activating the street level,’ and if you put that and the Heart of the City project together, it provides some sense of how you could approach it.”

“Discovery Walk” is the planned public realm that runs along four blocks of Second Avenue Southwest (from Heart of the City at Second Street to Soldiers Field Park at Sixth Street). The goal is to transform the underused and uninviting two-lane street into a tree-lined, multi-use linear parkway, much like Minneapolis’s Nicollet Mall.

“We’re working on quite a few street renovations in Rochester right now, and to be able to see what worked and what didn’t work – and to have the actual designers talk to us about it – was very helpful,” Clarke said. “Our folks were able to ask questions from why certain surfaces were used to choices made on lighting. They were also able to ask about how the Mall is programmed with events and entertainment. We wanted our colleagues to see – first, that it’s possible to do something like this – and second, to realize what an amazing opportunity we’ve got if we plan it the right way.”