The Sept. 19 celebration marking the grand opening of One Discovery Square, a cornerstone element of Destination Medical Center’s Discovery Square sub-district, was justifiably hailed as a joyous moment by hundreds of guests, local officials and curious passers-by on a warm afternoon in Rochester, Minnesota.

And why not celebrate? The official opening of the unique, 90,000-square-foot office/bioscience building, located at 201-299 4th Street S.W., commemorated a symbolic achievement for Rochester.

The quick lease-up of Mortenson’s building by tenants such as Mayo Clinic, the University of Minnesota-Rochester, Epic Systems, WuXi Diagnostics, Philips, Boston Scientific, Rion and others is already demonstrating how the core DMC goal of creating local economic diversity by leveraging Mayo’s healthcare industry clout can work in the real world. 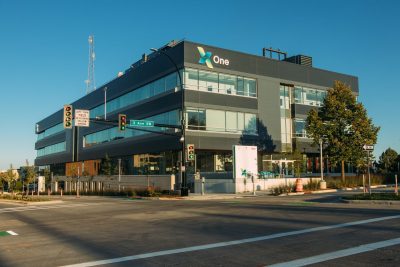 More evidence is forthcoming with Mortenson’s concept plans for a next-door sequel.

But even though the celebration was well-earned, it’s also wise to remember that One Discovery Square is only an early step in the much longer, 20-year DMC journey to broaden Rochester’s economy, said DMC Corp. Board Chair R.T. Rybak.

“This event probably should make me happy, but what it’s actually doing is making me anxious to do more,” he said at the DMC Annual Meeting, held in conjunction with the One Discovery Square opening. “At the same time, it also makes me confident that we can. Now we’ve seen a ‘proof-of-concept’ and the job has become putting our foot on the gas to make this even better.”

Rochester, Rybak added “is a complicated town because it has one of the greatest medical institutions in the world but an economy that rests narrowly on one base. Ironically, by investing in growth next to Mayo, we’re lessening the dominance of Mayo. Meanwhile, we’re also helping Mayo itself attract medical talent to Rochester – if a recruit’s life partner can find a job here in another field like software, engineering, communications or the creative arts, it will be to everyone’s benefit.”

Although the future certainly holds no guarantees, Rybak says his confidence in achieving DMC’s long-term economic diversification and investment goals is higher now than it was before One Discovery Square’s debut.

With that building’s space 85-percent spoken-for and demand not lacking, he said the big question with the upcoming Phase II has shifted from “Will there be enough interest?” to “How quickly can we get this done?” Which he acknowledges is a good problem to have.