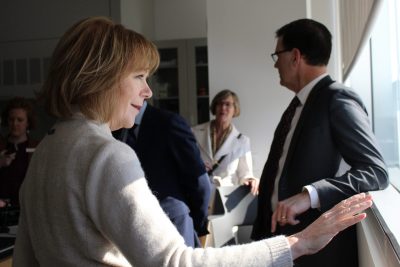 U.S. Senator Tina Smith recently stopped in Rochester to tour One Discovery Square, the healthcare innovation campus that opened in 2019.

Senator Smith served as Chair of the Destination Medical Center Corporation Board (DMCC) when it approved the construction of One Discovery Square in 2017, and she participated in the building’s groundbreaking later that year.

Over the past four years, Lieutenant Governor Tina Smith has provided valuable leadership to the DMC initiative as chair of the Destination Medical Center Corporation (DMCC) Board of Directors.

During her tenure, she has helped guide the DMC from its initial start-up, through the detailed planning, to the present where hundreds of millions of dollars of private investment are now underway in Rochester in support of the DMC vision.

Lieutenant Governor Smith has resigned from the DMCC board of directors; we wish her the best in her new role representing Minnesota in Washington, D.C.

A significant highlight shared with the Board focused on job growth. More than 3,300 jobs were added since 2014 and construction activity at the four DMC-funded projects will result in more than 1,000 combined construction jobs.

The Board specifically acknowledged today’s groundbreaking by Mortenson on their Phase 1 building at Discovery Square.

“Discovery Square will be the place where Minnesota’s next generation of medical start-ups will want to be. It will create new opportunity for jobs, innovation, and economic growth and represents a major step toward fulfilling our mission of building America’s City for Health,” said Lt. Governor Tina Smith, chair of the DMCC Board of Directors. “I thank Mortenson, Mayo Clinic and the Rochester community for their work on the Discovery Square project. This is great news for Rochester and our state.”