With the rapid population growth predicted for Rochester over the coming years, DMC and other community leaders appreciate the need to channel days gone by and rekindle the sense of fellowship that existed among neighbors before smartphones and Wi-Fi became the norm.

In 2007, a group of Ithaca, New York residents started a local festival to bring back a sense of unity to their community and celebrate local musicians. They launched the first “Porchfest,” an event that partnered local musical talent with area homeowners who provided porches, decks, and lawns where the artists could perform. Since that first event ten years ago, similar events have sprung up in cities all around the nation.

Rochester’s first Porchfest took place in the Kutzky Park neighborhood last fall when 12 hosts invited local musicians to perform outside their homes. More than 300 people attended the city’s inaugural event, and organizers are looking forward to an even greater turnout for Porchfest 2017, scheduled for Saturday, September 16.

“Last year, people of all ages from all over the community came to walk and bike through our neighborhood and heard a variety of music,” says event organizer and Kutzky Park Neighborhood Association president, Jesse Welsh. “The support of local artists, media, businesses, and individuals made the first annual event a huge success. This year, we have expanded the event in response to growing interest and excitement.” 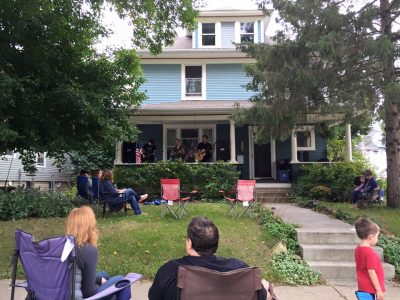 Porchfest organizers are working with DMC, the city of Rochester, and area business owners to close off a portion of 12th Avenue SW for the afternoon. Porchfest provides an opportunity for to prototype some of the ideas that resulted from the St. Marys Place planning and design work that took place earlier in the year, including bike lane prototyping. Organizers will bring the temporary 12th Avenue “plaza” to life with the Building Blocks mobile block party trailer, music provided by the Jive Mill, and space where community members can provide more input about the future of St. Marys Place.

Welsh says the event is organized and staffed entirely by volunteers who want to see more community-building and leverage the musical talent that exists in and around Rochester. “There will be a variety of music at the 14 stops we have planned,” she says. Musical performances will take place in waves throughout the afternoon, beginning at 2:00 p.m. and wrapping up around 6:30 p.m. Forager Brewing Company and area food trucks will also be set up on-site.

Mark your calendar today for Porchfest and another opportunity to provide your input about the future of the St. Marys Place sub-district.