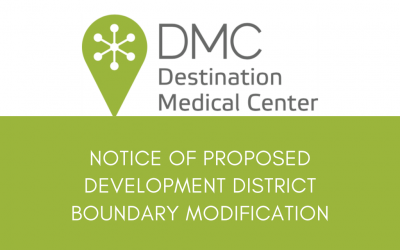 The Destination Medical Center Corporation, pursuant to Minnesota Statutes, Section 469.43, subds. 1 and 4, provides notice of a proposed modification to the Destination Medical Center Development District, the geographic area in the City of Rochester in which public infrastructure projects are implemented. An overall map of the proposed change, with detail in the legend, as well as the DMCC resolution approved May 28, 2020 follow.

Copies of the proposed modification to the Development District are available at the DMCC and City offices (201 4th Street SE, Rochester, Minnesota 55904) and at the DMC EDA office (195 South Broadway, Rochester, MN 55904), as well as on-line at the following websites: www.dmc.mn and www.rochestermn.gov.

All interested persons are invited to submit written comments on this matter by 5:00 PM on Tuesday, August 18, 2020, to the City Clerk, City of Rochester, 201 4th Street SE, Room 135, Rochester, MN 55904, or to attend the public hearing to be held on August 27, 2020 before the DMCC Board of Directors. The notice of the time and place of the public hearing will be posted separately. 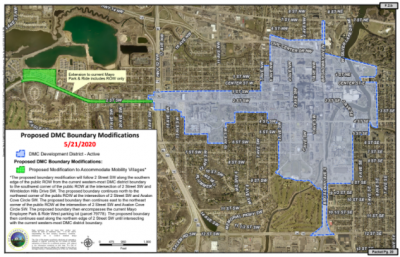 This Resolution was offered by Kim Norton, seconded by James V. Bier.

A. Pursuant to Resolutions Nos. 87-2019 and 89-2019, the Destination Medical
Center Corporation (“DMCC”) approved a locally preferred alternative (the “Locally Preferred
Alternative”) for route, alignment and mode for the downtown circulator and additional project
features, authorized expenditures, and approved application to the Federal Transit Administration
for federal funding. These resolutions also contemplated a modification of the development
district, the geographic area in the City of Rochester (the “City”) identified in the Development
Plan (adopted on April 23, 2015, as amended), in which public infrastructure projects are
implemented as the Destination Medical Center development district (the “Development
District”).
B. The City and the Destination Medical Center Economic Development Agency
(“EDA”) now request for a modification to the Development District, set forth in Exhibit A
attached (the “Proposed West Transit Corridor Development District Modification”), in order to
implement a phase of the Locally Preferred Alternative.
C. The DMCC may modify the Development Plan at any time, and must update the
Development Plan not less than every five years. Pursuant to Minnesota Statutes Section 469.43,
subdivision 4, a modification or update must be adopted by the DMCC upon the notice and after
the public hearing and findings required for the original adoption of the Development Plan,
including approval by the City.
D. The DMCC must hold a public hearing before modifying the Development Plan.
At least sixty days before the hearing, the DMCC must make copies of the proposed
modifications available to the public at the DMCC’s and City’s offices during normal business
hours, on the DMCC’s and City’s websites, and as otherwise determined by the DMCC. At least
ten days before the hearing, the DMCC must publish notice of the hearing in the official
newspaper of the City. The DMCC may modify the Development Plan upon its finding that the
elements of the statute have been satisfied, and upon approval of the modification by the City.
E. The City must act on the proposed modification to the Development Plan within
sixty days following its submission by the DMCC.

The question was on the adoption of the Resolution and there were 6 YEAS and 0
NAYS, as follows: 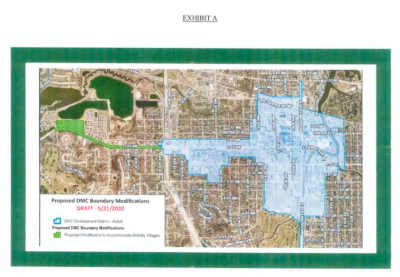