A happy, healthy city that’s walkable, has plenty of parks, and offers ample public transportation. Sounds like a great place to live, doesn’t it? 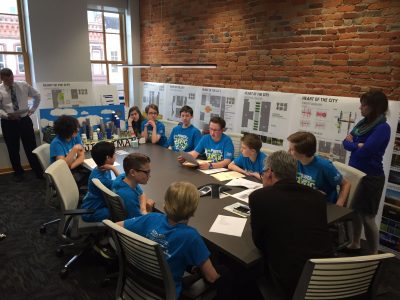 Future City is a project-based learning program for middle school students where they can explore, imagine, create, and ultimately build a city of the future. Together, the students design the city, research and write its description, build the physical model, develop a project plan, and introduce the city to the judges during a seven-minute presentation.

When the DMC Heart of the City Design Team learned that a group of students from Rochester’s own Saint Francis of Assisi was taking part in the Future City competition, they quickly recognized the value in sitting down to discuss their similar endeavors and share ideas with the up-and-coming planners. A meeting was arranged at RSP Architects in downtown Rochester during which the two teams swapped theories, shared design concepts, and discussed the tenets that make a great city. 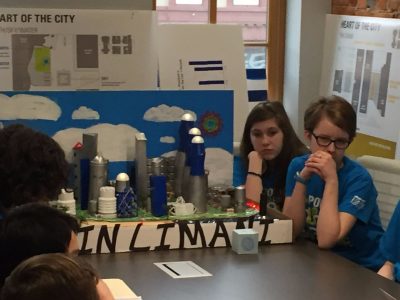 The city goals set forth by the team at Saint Francis parallel those that describe any great city:

The months of collaboration put forth by the students were applauded by both the Future City judges and the Heart of the City team.

To read more about the Future City students and their meeting with the Heart of the City Design Team, check out RSP’s blog.

To learn more about the Heart of the City sub-district, click here.